Founded in 1666, Fort St. Jean is celebrating 350 years as a key post guarding the highway to Canada along the Richelieu River and the development of the town around the Fort.  For a history of St. Jean (en français) click here.  We will be celebrating with the residents of Quebec this long history covering the Seven Years War, the American Revolution, and the War of 1812. 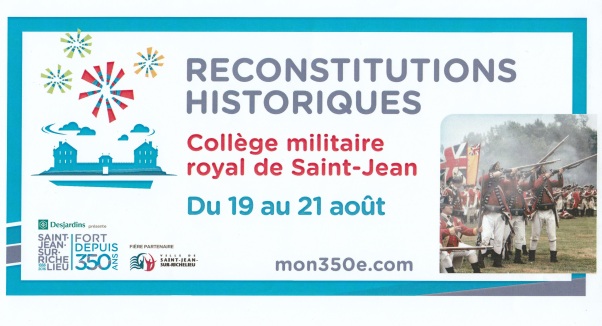 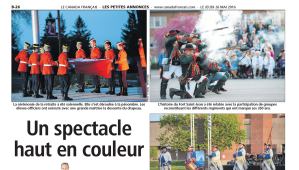 Fort Saint-Jean guarded the entry to Quebec province on the the Richelieu River at the northern end of Lake Champlain.  Following the capture of Fort Ticonderoga, American forces launched a raid against St. Jean in May 1775.  On September 4th, an American Army of 1500 under the command of General Montgomery landed on Isle-aux-Noix.  The stage was set for attacking St. Jean.

September 6th, 1775. As Montgomery’s boats approached Fort St. Johns, British guns opened fire but do little damage.  The American troops landed in a swamp about a mile from the fort. This advance force is quickly ambushed by Claude de Lorimier, Captain Tice and their Indian allies. The American forces, having experience in Indian warfare, quickly dug in and return fire. The Indians made little headway until the fort’s guns got the range. Under pressure from the guns and the Indians, the rebels withdrew to their boats and with night approaching, set up a small entrenchment. The next morning, Montgomery’s forces returned to Isle-aux-Noix.

September 16th, 1775 – Further reinforced, Montgomery led the army against Fort St. Jean. Landing the next morning, his men advanced on the fort and a detachment under Colonel John Brown moved to block the road north to Montreal. As the day progressed, Brown intercepted supply wagons heading for the fort. Learning of this, Preston dispatched part of his garrison to recover the lost goods. Marching out, the British attacked Brown, but Montgomery sent reinforcements which defeated the sortie.  The siege of St. Jean had begun.